From VisionaireWiki
Jump to navigation Jump to search

Emitter belong to a particle-system like the objects belong to a game-scenery. As usual you find them down left. You have to create one particle-emitter at least so that something appears. (please see the figure below). 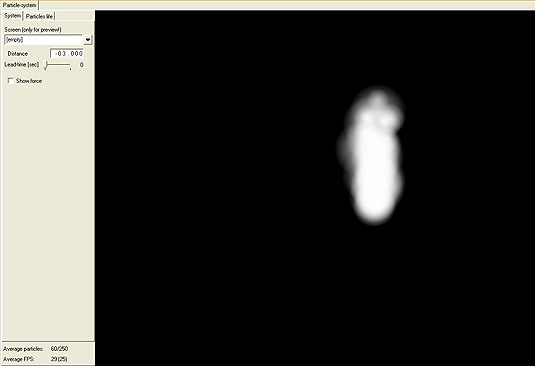 Below the area of parameters you find two measured values of the active particle-system:

A timestep has got 25ms. If the number in brackets reaches regularly 25, the calculating and drawing takes less than 1ms on your personal computer.

The particle-systems all work after the same principle:

The form of the particle-system will be defined by the opening angle of the emitter, by the direction of the radiation and by its own form.

Particles are generated by an emitter in a solid angle, defined by "opening X" and "opening y". 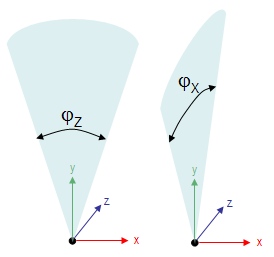 Both solid angles will be handled by throttles. The range of values contain 0-360°.

The maximum opening angle of 360° to both directions conforms to a orbicular emitter.

If both angle are set to 0° this accords to a subtle stream along the main direction of the emitter.

The volume, which is defined through the two opening angles will be turned to the main direction of the emitter. So it's possible to align the particle-stream to a user-defined direction.

Starting point is the Y-axis, e.g. if X- und Z-angles are set to 0°, the emitter streams up. In a circle-stream-system the turning angles naturally have no effect. 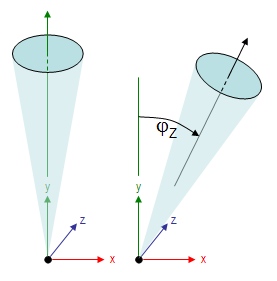 The values of the angle are mathematically positive (anti-clockwise)

Form of the emitter

There are two forms of emitter: Point- and space-emitter. 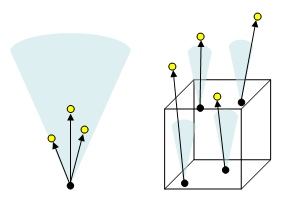 Point-emitter: All particles are generated in one point. From there they will be streamed into the opening angle to the set direction.

Space-emitter: A particle is generated at a random point anywhere in the space. The opening-volume and the direction are set to the random generated point in the space.